Your browser does not support the Unity Web Player. Want to save the game of the year for later? Add it to a collection.

Add Game Of The Year To Collection

Download the Win/Mac build below for the best experience.

If you have an itch.io account, please vote for the game on the right! ->

Featuring lots of flashy colors and memes, probably 6 or so weapons? Including 1 secret hehe., inverse cinematic more than 60+ FPS, gripping storyline with amazing plot TWISTs, fight shrek in his swamp, explosions that will make you wow, and HyperImmersive™ AI driven dubstep drops.

0. Extract all contents of the .zip file onto your harddrive
1. read README
2. #blazeit
3. run GAME OF THE YEAR 420 BLAZE IT.exe

i did it for the first time

Game of the year/5

This gsme is so good! I never missed a shot! (imaagine a smiley with sunglasses on)

m8 you should upload this to itch imo.

holy shit there is so much spam

What da fuck is going on here ?

Can you please make a sequel. This was fucking amazing.

This inspiring innovation in gaming rightfully won the title of Game Of The Year back in 2014 and it really shows. A large assortment of weapons, crisp controls, and shocking and heartbreaking plot twist are just some of the 3 things you can expect from this amazing game!

I have to rate this masterpiece: 8/8 gr8 b8 m8. i rel8 str8 appreci8 and congratul8. i r8 dis b8 an 8/8. plz no h8, i'm str8 ir8. cr8 more cant w8. we shood convers8 i wont ber8, my number is 8888888 ask for N8. no calls l8 or out of st8. if on a d8, ask K8 to loc8. even with a full pl8 i always hav time to communic8 so dont hesit8. dont forget to medit8 and particip8 and masturb8 to allevi8 ur ability to tabul8 the f8. we should meet up m8 and convers8 on how we can cre8 more gr8 b8, im sure everyone would appreci8 no h8. i dont mean to defl8 ur hopes, but itz hard to dict8 where the b8 will rel8 and we may end up with out being appreci8d, im sure u can rel8. we can cre8 b8 like alexander the gr8, stretch posts longer than the nile's str8s. well be the captains of b8 4chan our first m8s the growth r8 will spread to reddit and like reel est8 and be a flow r8 of gr8 b8 like a blind d8 well coll8 meet me upst8 where we can convers8 or ice sk8 or lose w8 infl8 our hot air baloons and fly tail g8. we cood land in kuw8, eat a soup pl8 followed by a dessert pl8 the payment r8 wont be too ir8 and hopefully our currency wont defl8. well head to the israeli-St8, taker over like herod the gr8 and b8 the jewish masses 8 million m8. we could interrel8 communism thought it's past it's maturity d8, a department of st8 volunteer st8. reduce the infant mortality r8, all in the name of making gr8 b8 m8 .

Best game in the universe.

Also, what the hell is with all this spam in the comment section?

Exclude all the dead memes, then you got yourself a succesful FPS game.

Dead meme but still good, just take out all the dead memes and you got yourself a successful FPS. If you can, would you remake this but without the "MLG."

If this doesn’t get you hyped, I don’t know what will

i love this game

this is soooooooo geat

this is soooooooo geat

THIS IS THE DANKEST GAME

This game was excellent. By all rights the game should be horrible, however everything comes together in a way that is an absolute blast to play.

Before I continue I would like to note this game has a lot of flashing lights and colors. If you have epilepsy or are prone to epileptic attacks, play this game with caution.

The first thing that struck me was how good the gunplay is. The guns sway with movement, have fairly accurate recoil, and for the most part are very satisfying to use.

The game has memes that flash across the screen everytime an enemy is killed. Rather than being annoying, the memes feel more like background noise, hardly noticed yet greatly adding to the chaos. Sadly most of the memes are outdated, though that is to be expected of a game made in 2014.

There is music that plays throughout the game. It is very techno/dubstep like. I am normally not a fan of that kind of music, but in this game it works so well, making me feel pumped up for whatever is next. I believe there are only two soundtracks, yet they don't get old after a while. This is likely helped by the game's short length.

There are a couple of slow-motion sections in the game, much like Call of Duty's "breach and clear" moments. Slow-motion is also activated for a few brief seconds when an explosive "barrel" is shot.

The controls are alright, but are fairly basic.

The game has very sporadic controller support. Sometimes a controller works, and other times it doesn't. From what I've seen attempting to use a Playstation 4 or Xbox One controller is practically guaranteed to not work.

Had way too much fun playing this game for my own good!

but also u could make a really good first person shooter out of this. 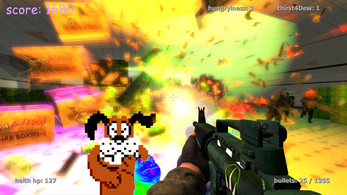 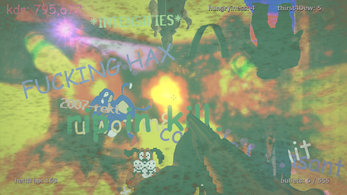 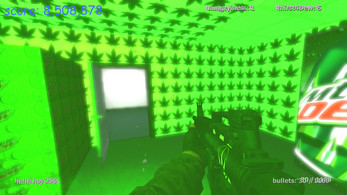 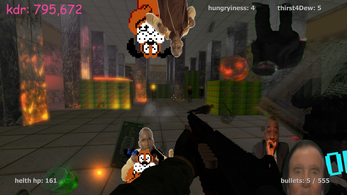 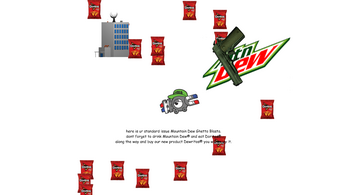